The Strange World of Invisible Bifocals

I can’t count the number of people I have seen over the years who were struggling with their blended/invisible/progressive “bifocals.” These of course are not bifocals, but complex, and very fussy multi-focal lenses; technically speaking they are called progressive addition lenses (PALs). The idea is excellent - a single pair of glasses through which a person can theoretically see clearly at any distance, day or night, rain or shine. It’s a great idea whose implementation leaves a great deal to be desired in many cases and in many ways. This is still true even after many years and many attempts by many clever people in many companies to iron out the bugs. Some versions work better than others, but in my experience, they still demand compromises that are unacceptable in my mind.

Some of the people who come to me for help are able to wear these lenses comfortably and successfully and others are not. Some had worn them with no apparent complaints until it was determined that using these lenses had contributed to rather significant disruption of their overall visual efficiency. Many successful wearers unconsciously adopt somewhat tortured head postures and head movements in order to use the lenses. Some had worn them uncomfortably for years, thinking they had no other choice or that there was something wrong with them. These people typically come in complaining of various things including eye fatigue, dry eyes, headaches, neck pain, queasiness, etc. Some assume it can’t be fixed, others insist that they want something else.

The Importance of Prescribing Lenses: More Than Meets the Eye - Part 3: Too Close For Comfort

In The Importance of Prescribing Lenses: More Than Meets the Eye - The Sequel we discussed the important role played by the brain in the visual process. We also touched on the idea that the eye doctor might also play an important role in how your visual process functions and develops.

The main problem is usually close work, even when the main symptom is nearsightedness.

The human visual system is not really designed for the kind of close work we spend so much of our time doing in the modern world. Our visual systems are designed for action. In fact, the primary purpose of the visual process is to direct action. When it comes to vision, the brain stores representations of actions not images. Most modern close work involves sitting still and reading - two things that are not particularly active, nor particularly natural, especially for young children. Many visual problems involve stress on the visual process resulting from excessive, though clearly necessary, close work and the struggle to meet the unnatural demands asked of the visual system.

One of the most common responses to visual stress related to close work is nearsightedness - the inability to see past a certain distance without artificial lenses. Not all nearsightedness arises this way…just most of it. The typical response of eye doctors is to simply address the symptom by prescribing compensating lenses (which they describe as "corrective lenses") and telling people it’s hereditary even though the vast majority of nearsightedness is not hereditary. This approach not only fails to address any of the possible (that is, likely) causes, but it almost always leads to a worsening of the very condition it is supposed to "correct."

The Importance of Prescribing Lenses: More Than Meets the Eye - The Sequel

Last time I took up the idea that lenses can do much more than just make things look clear or make someone’s eyes look less crossed. I also discussed how most doctors are satisfied simply tending to these surface issues, but remain uninterested in investigating the causes and the bigger picture - those visual issues that cause many people to need glasses for clarity in the first place. Also ignored is the possibility of using lenses (and vision therapy) to promote improvement instead of expecting (and unfortunately, all too often aiding) deterioration of the visual process. I feel that any doctor who isn’t providing more comprehensive vision care should at least assess patients for these problems and then refer them to someone who is experienced in understanding and providing treatment for these kinds of visual issues.

It's not what a lens does, but what a person does with a lens that matters.

The Importance of Prescribing Lenses: More Than Meets the Eye

I have worn lenses for nearsightedness since the age of eight, which was &*% years ago. My lenses got stronger as my eyes got weaker. This eventually became one of the main reasons I decided to become an optometrist. I think the combination of my experiences with eye doctors and the things I learned (and continue to learn) as a behavioral optometrist also cause me to be especially thoughtful and cautious when it comes to other people’s lenses. I've attended many workshops and read many books telling people how to get rid of their glasses. I wasn't particularly impressed with any of them and once I became an optometrist I wrote my own book - Looking Differently at Nearsightedness and Myopia. My advice? Find a behavioral optometrist who's willing to help and who understands the issues involved. I have helped hundreds of people reduce or eliminate the need for nearsighted lenses as well as those for farsightedness and astigmatism. But I digress.

Lenses change instructions and feedback to the brain.

Why all this fuss about lenses?

Lenses are an incredibly powerful and safe tool for helping people of all ages improve their overall performance, productivity and comfort. My previous posts on lenses included concepts such as lenses are medicine and lenses change the instructions to the brain. It is important to appreciate that the visual process is not restricted to the eyes. The intake and processing of visual information and subsequent action that comprises the visual process are processes of the brain. Lenses should be considered medicine because they act on the brain. Lenses act on the brain by changing the character and quality of the light (the information, signals and feedback from the environment) reaching the brain. Therapeutic lenses do so in a purposeful way. And while there is no way to predict the exact way any particular brain will respond, an experienced behavioral optometrist can help steer the process in the right direction by the careful choice of lenses and possibly vision therapy.

No Pain, No Strain?

What is visual stress? 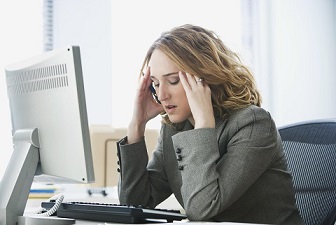 Prolonged close work is stressful to the human visual system. A.M. Skeffington, a founder of the behavioral philosophy of vision care, referred to prolonged close work as biologically unacceptable and socially compulsive. Our visual systems are action based systems. Movement is a critical ingredient in human development and development of the visual process. The primary purpose of the visual process is to direct action. Sitting in a chair (or whatever)

reading or looking at a computer doesn’t really qualify as the kind of action we need. Our visual systems are also designed for three-dimensional interaction. Again, reading and computers just don’t cut it – they are two-dimensional.

Lenses can have a tremendous impact on the well-being of people of all ages, especially children. I say especially children because lenses can stimulate development of the visual system and help prevent some visual problems from occurring, even more so when used in conjunction with vision therapy. The importance of proper lenses becomes even more critical as we move further and further through the computer age with its accompanying increased demands and stress placed upon the visual process. In some cases, even without vision therapy, proper lenses can provide a significant boost in performance for many people of all ages. The lenses most people are wearing tend to impact visual development negatively however.

Lenses, They’re Not Just For Your Eyes Anymore

Most people know about “corrective” lenses. Most doctors happily prescribe them without giving it a second thought. Countless individuals see their prescriptions increase year after year for some period of time. The vast majority of doctors who prescribe these lenses believe that this is an unchangeable fact of life. In fact they expect this to happen in most cases. It doesn’t have to be this way. I know this for a fact. I reduced my own prescription by using a creative approach to prescribing lenses and vision therapy. I have, since then, helped hundreds of people reduce their prescriptions when other doctors would have increased them. Most important, I have used lenses as a therapeutic tool to prevent people from needing these “corrective” lenses in the first place.

Standard eye care, unlike behavioral optometry, sees lenses as passive devices to compensate for some obvious symptom, such as nearsightedness (myopia), farsightedness (hyperopia) and astigmatism. The conditions just mentioned, which are familiar to everyone, are in many cases only the end result of more subtle visual problems. The visual problems that often lead to nearsightedness involve some inability of the brain to use the two eyes in the way they were meant to work. Prescribing “corrective” lenses doesn’t even really solve the problem of nearsightedness; it only masks it. The dynamic and strategic use of lenses can help deal with the root of the problem and alleviate symptoms by addressing the causes instead of merely masking the end result.

Find us on the map