Eyes Are People Too 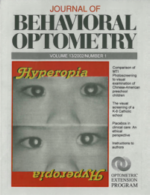 I have often helped people understand aspects of having the two eyes work together in a coordinated way by comparing the eyes to two people in a committed relationship. Better understanding of self and of one’s partner make for better communication and more integrated interaction. This somewhat tongue-in-cheek look at the visual process and human relationships contains some interesting connections and truths. An abridged (and I believe less amusing) version was published; the original version appears here.

WARNING: The use of the term eye should not be taken literally here. I am using this word to denote the pathway of light-stimulated neuro-electro-chemical signals proceeding from the external environment through the optical device known as the eyeball, along the optic nerve and spreading itself throughout the various structures and processes of the brain, mind and body after which it is turned into responsive action in the form of thought and/or bodily movement. It just seemed that the word EYE would be much simpler to use, as this concept may tend to appear numerous times throughout this presentation. When I am referring to the actual globe and its physical contents I will try to use the term EYEBALL.

Also, this subject should not be considered related in any way, either literal or fictional to my recent divorce. Any similarities between the ideas presented here and any aspects of my crumbled personal relationship are purely a result of my unruly subconscious. Finally, no plants or animals were hurt during the creation of this piece.

No two people are identical. Even identical twins have physical differences and their personalities are typically quite different. No two eyes are identical. The two eyeballs of a given individual have different physical appearances, internally and externally. The way each transforms light may be quite different. The difference may be related to color perception, image clarity, image size, etc, or it may be any combination of these things to varying degrees. There may be functional differences in the eyes’ accommodative or oculo-motor performance. It is important for two eyed individuals to get the two eyes working in a way that provides the highest possible levels of comfort and efficiency. In attempting to achieve optimal performance, it is not necessary for the two eyes to become equal in the way they perform, only that they work in an integrated fashion.

The idea for this paper evolved as a result of my attempts to justify, in my mind and in the minds of my patients, the purpose for using an eye patch for various visual training procedures. The reasons presented during my formal education consisted of nothing more than the “fact” that there existed a hierarchy in visual training that began with “monocular” procedures. I later heard the opinion of Dr. Richard Appell that the fact that a person is wearing an eye patch does not make them “monocular.” It merely makes them binocular with one eye occluded (assuming they behave binocularly to begin with). For example, the expected response on a Brock String is two lines that diverge from the point of fixation, each string being equidistant from the midline. A person giving this response will merely report the disappearance of one string when one eye is occluded. One undesirable response that is commonly seen is a single string along the midline, which could be characterized as a “monocular” response. Occluding one eye of someone giving the expected response will not usually yield this response. Dr. Appell’s concept seemed worthwhile and became an important aspect of my thinking in the training room.

I have found it useful to describe the partnership of the two eyes as being analogous to two people involved in a relationship. In order for a relationship to work well, the two partners must understand and work within the context of each other’s strengths and weaknesses. However, it is not always easy to know just what these strengths and weaknesses are. Sometimes there is the appearance of a strength or a weakness that is merely a façade. This façade may be consciously utilized to hide certain traits a person feels uncomfortable sharing with the world (or himself) or it may be an unconscious way of behaving that has emerged in an effort to feel more at ease with intrapersonal and interpersonal interactions. Relationships work best when each partner knows himself or herself well and when each knows the other well. Chances are better for smooth and lasting integration when more information is available to both parties, and communication between them is consistent, that is consistent with regard to meaning and consistently available with a minimum of effort.

Relationships are not always so smooth, nor so symmetrical – at least not mine. Each partner does certain tasks more easily and with less stress. This makes it easy for the relationship to be lopsided. In some cases, one partner becomes so dominant that the other takes very little responsibility and is in many ways just along for the ride. The longer this behavior persists, the more embedded it becomes. Also, as this behavior persists, the dominant partner may develop some level of resentment towards his or her mate. This resentment is two-fold: First, there is the resentment of the party of the first part having to do all the work; second, any attempt by the passive partner, the party of the second part, to assert himself is seen as threatening to the party of the first part who, although resentful of having to do all the work, revels in the feeling of superiority not to mention having something to lord over the party of the second part. These two aspects can obviously work against each other, leading to stagnation and embedded patterns that do not allow for growth. This may all sound very confusing and that my friends is the point. There must be some kind of resolution: either modifying the responses to the way things are, or changing the way things are done. Otherwise the relationship, and often the sanity of the individual parties is in jeopardy. In legal parlance this is known as the sanity clause. Now, I know what you’re probably thinking…you can’t fool me, there is no sanity clause*. But I won’t go into that here – let’s move on to the visual aspects of this potentially messy situation.

Amblyopia serves as the most obvious example of how this is seen within the context of the visual process. In the case of unilateral amblyopia there is one eye that provides the expected level of acuity consequent to its ability to look accurately at a desired object. The partner eye has a history of avoiding doing most of the things that the other eye does more effectively – which is often just about everything. This can be a common scenario in relationships as suggested earlier. And this is the way the visual process is functioning for the untreated amblyope. The preferred eye has considerable experience being in control and doing all the work. Attempts at increasing symmetry may be threatening to this dominant partner. The passive side may be unwilling to attempt action because it knows its attempts are doomed to fail (having poor self-esteem), and because it is afraid to rock the boat.

Brief note: The concept of a lazy eye should be changed to that of a heroic eye. In reality the eye is not lazy but is demonstrating heroic behavior in that it has sacrificed its own well-seeing for the good of the whole person

When there is supposed to be a committed relationship between two eyes and one eye starts showing an unnatural and decidedly unacceptable fondness, say for an ear or a nose that is nearby, you can be sure the symmetry of the relationship is in jeopardy. When an eye starts spending too much time looking towards such inappropriate body parts, only trouble can follow. Sure there are times when both eyes seem obsessed with certain body parts – but these are usually on someone else’s body. This however usually reflects some form of teamwork and a commitment to working together toward a particular goal. This is far more acceptable and more likely to lead to continued teamwork as a result of the successful forays already experienced.

The issue of the roving eye can be dealt with using monocular occlusion within the context of a thorough visual training program. Under controlled conditions, the uncovered eye has the opportunity to carry out a task without the usual input from its partner. This provides feedback that would otherwise be unavailable under normal conditions. There are behavior patterns that come into play whenever the eyes are open. While some aspects of these patterns are still active even with one eye covered, there are enough differences under these conditions for the usual patterns to be disrupted. This gives the uncovered eye unique opportunities to feel its own way through the tasks placed before it. This is where the analogy tends to break down a bit. It is usually considered bad taste to isolate an entire human partner, say in a closet or the trunk of a car – which could be analogous to occluding one eye – for even fairly brief periods of time.

We have two inputs for a reason. Separate inputs provide two viewpoints from which to gather information. This is valuable on two levels. First, better decisions result when more information is available – getting two sides of a story as it were. (There are always at least two sides to every story.) Second, in any healthy relationship, the combination of the two is greater than the mere sum of the parts. In the visual version, without prior experience and knowledge that we live in a three-dimensional space-world, each input provides a two-dimensional image. When the two visual inputs are combined properly however, the resulting imagery is three-dimensional in appearance. Therefore, it is worthwhile to pursue an improved relationship between the two partners. Similar issues emerge when combining two individuals – the resulting experience can be exponentially more interesting than for either partner alone. However, it is also important for each partner to have time alone to be more self-observant. It may be that eyes and the people that use them have much in common. So, don’t forget to close one eye every once in a while, even briefly – but be careful who is watching and where you’re looking when you do it. Your best bet is to do it when you’re alone with the one you love…or under the professional guidance of your loving optometrist.

*Chico Marx from “A Night At The Opera”

Find us on the map